Johannes writes:
With the beginning of my third and last term at MOET, I decided to diversify my teaching in Standard 6 a bit, adding the subject “English Language” to my responsibility. Previously I had just taught “English Grammar”, which is really important for the children, but rather unexciting to teach. My new subject gave me a lot more freedom concerning the choice of topics, educational games and the use of our new projector.
The most exciting lessons were definitely those about the Malawian Parliament, in which the children learnt about the way a parliament works, read some simplified speeches and in the end wrote their own, to have a real Malawian-Parliament-style discussion.
In their speeches, most of the children commended the good roads (true, I think!) and the good schools (definitely!!) in their constituencies, whilst criticising the government for the shortage of food and the bad police. It was really lovely to listen to the speeches of the good students, and to the great ideas they had for Malawi!

Another highlight was the introduction of worksheets, “Can we really write on the papers, John??” about dinosaurs, of which they have never heard of before. 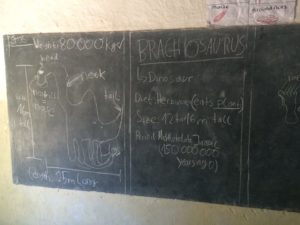 Since I was given full responsibility of English in Standard 6 during the last term, I was also responsible for preparing my class for their End of Term Examinations in that subject. It was a bit more scaring than it initially sounded, because the headteacher and an examination board usually create those exams, to have an unbiased overview of how each class has really progressed in the last year. After a few days of uncertainty, I was quite relieved to see that my kids had done really well and the vast majority of them passed the headteacher’s exam.